Posted on
by
Clair Byrd 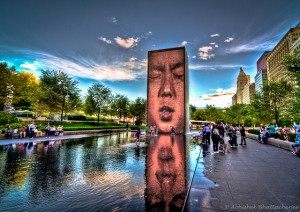 Crown Fountain is an interactive work of public art and video sculpture featured in Chicago’s Millennium Park, which is located in the Loop community area. Designed by Catalan artist Jaume Plensa, it opened in July 2004. The fountain is composed of a black granite reflecting pool placed between a pair of glass brick towers. The towers are 50 feet (15.2 m) tall, and they use light-emitting diodes (LEDs) to display digital videos on their inward faces. Approximately 75 ethnic, social, and religious Chicago organizations were asked to provide candidates whose faces would be photographed for integration into the fountain. The subjects were chosen from local schools, churches and community groups, and filming began in 2001 at the downtown campus of the School of the Art Institute of Chicago (SAIC). To achieve the effect in which water appears to be flowing from subjects’ mouths, each video has a segment where the subject’s lips are puckered, which is then timed to correspond to the spouting water, reminiscent of gargoyle fountains. (source Wikipedia)