Content is an investment. Each and every blog post, eBook or video you publish as part of your content marketing strategy takes precious time, resources and budget. The sad news is that the payback period for that investment is usually pretty short: a few minutes on Twitter, a few days on your blog… In a world where content discovery is driven more and more by social media feeds, the lifetime of content shorter and shorter.

There are different ways to address this and make your content work longer. The first is of course to promote – and not just simply share – your content: sharing your content only once means only 3-5% of your followers will see it. Each new piece of content you create deserves better than that so you should use content distribution tools to promote it for several days or weeks. Promoting each and every new post is a must-do and it’s impact is significant. But there are several questions that arise when you start doing content promotion systematically:

Reflecting on these questions has led us and many other content marketers we’ve discussed this with to think about our content distribution efforts as a 2-phase process:

In short: we promote every piece of content but we amplify only those that work best.

Many of the content amplification techniques available today come at a cost as they rely on you getting access to somebody else’s audience. Either because they’re using some form of advertising or paid promotion – such as boosting a post on Facebook for instance – or because they require work- for instance outreach to influencers which is great but takes time to build relationships.

By contrast, organic content amplification focuses on your own channels. So we’re talking about re-sharing or emailing successful content long after it’s been published. But isn’t that repeating the same message to the exact same people you reached out to during the promotion phase?

The answer is: yes and no but it doesn’t matter.

Why the answer is no: because your following and email subscriber bases will have changed in the meantime. If you published a post 8 months ago and promoted it for 2 weeks, your Twitter followers or your MailChimp lists are not the same: some people left, hopefully a lot of new people came in. These new people didn’t see your content 8 months ago so if it’s evergreen, it makes sense to them.

Why the answer is yes: because some of your current followers / subscribers definitely were already here when you initially published and promoted the piece but it doesn’t matter because:

We’ll go into greater detail on best practices to ensure your amplification doesn’t create follower fatigue as well as how you can implement it without losing time spent what you make in getting extra promotion.

But first, let’s look at whether it’s worth doing and what to expect from it.

For it to be worthwhile as a technique, we need to look at the impact of re-distributing older content on the important KPI’s of your content marketing. For many marketers, the goal of content is to drive lead generation and we already made the point that attributing conversions to content is essential to measure and drive content marketing ROI.

So in the data below, we’ve mapped distribution events such as sharing content on social media or sending it in email newsletters against the cumulated traffic and leads generated by the post. To do this, we obtained the data from our own Scoop.it Content Director, our content marketing software which tracks the number of leads generated by each single post we publish on our blog and also produces the graphs below showing how the timeline of our distribution events (vertical bars) has impacted the cumulated traffic or leads generated. 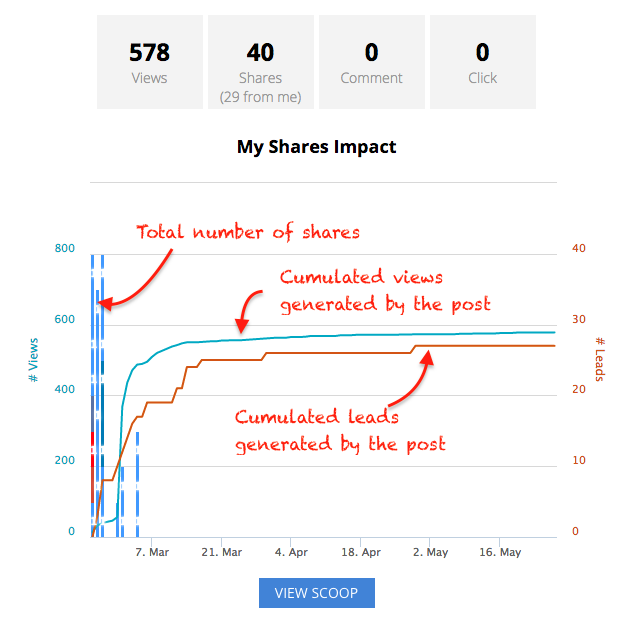 During the 2-week promotion phase: you can see that the post was given multiple shares (the blue vertical bars), which resulted in rapidly growing traffic and leads. After the promotion phase is over, the traffic and lead lines quickly plateau: the post has hit a sort of glass ceiling and only search traffic and some rare in-site navigation path will drive readers to it.

After the promotion phase: the post won’t deliver much in the way of results: 85% of traffic and 67% of leads were generated during that phase. Said differently, 3 months later, this post doesn’t deliver much results anymore: only 17% more traffic and 50% more leads.

Traffic and lead generation pattern of an amplified post: example 1

Let’s now take a look at what happens if we amplify a post which means that after we promoted it during the first couple of weeks, we give it more distribution on social or email because the post is good and it’s evergreen. 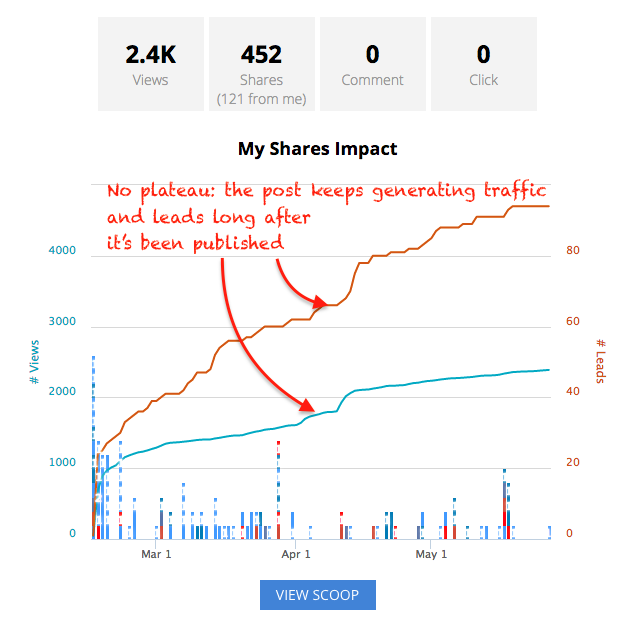 The pattern of the graph during the promotion phase is very similar to the previous example. Traffic and leads grow as the post gets some initial distribution. But the big difference is that now, the post keeps delivering traffic and leads 3 months down the road as it keeps getting shared.

The post actually delivered 2x the traffic and 2.5x the leads than what it did in the first 2 weeks.

Traffic and lead generation pattern of an amplified post: example 2

Here’s another example of a post that went through promotion and then amplification: 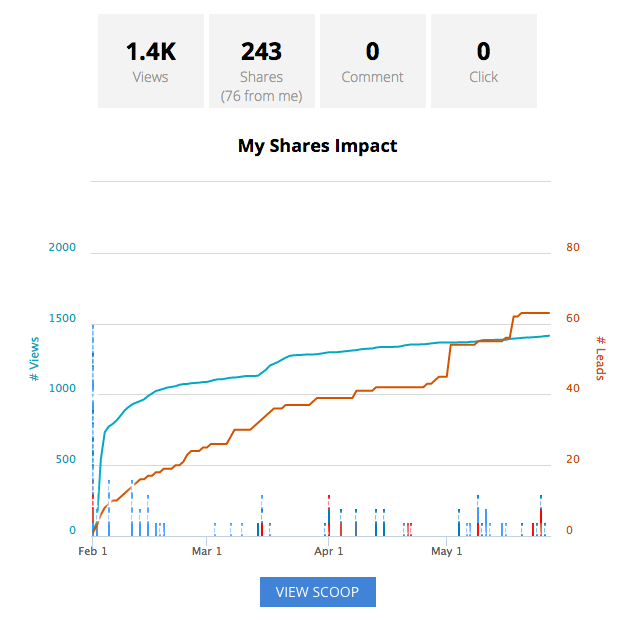 The growth pattern is the same as for the previous example: rapid growth initially and then slower but steady continuous growth instead of a plateau as the posts gets re-shared.

The post delivered 3x more leads by being amplified than if it has simply been promoted.

So how well does organic content amplification work in the long run? Does it really work at scale and over time?

To find out, I’ve reached out to Jeff Bullas as he’s not just one of the top marketing influencers but I’ve also noticed he had been using this technique for several years now.

So what does Jeff have to say about the technique?

Jeff recommends that the content you re-share this way be “evergreen content that will be relevant over a long period of time”. And as a testimonial to the ROI of organic content amplification, he adds that “these tactics were key to growing my Twitter following that now stands at 465,000+ and building my site traffic to over 5 million hits per year.”

In this other post – that is definitely evergreen and still very interesting to read – Jeff also provided great social media publishing techniques that have worked for him and some of the top brands on Twitter.

The ROI of organic content amplification is clear, provided you don’t invest too much time in finding out how to amplify content and you’re not creating a negative downside effect like follower fatigue in the process.

Let’s now see how to address these latter points.

Your followers and email subscribers are precious. It’s therefore essential that you guard against annoying them with content amplification. In order to avoid creating follower fatigue, there are a number of common sense best practices to consider:

The tools you choose to do this kind of content amplification should therefore cover performance analytics (so you can identify the content that deserves amplification), social media publishing and email. The more integrated, the better as juggling from one tool to another is a time sinker.

From a pure logistic standpoint, managing manually organic content amplification can rapidly be a nightmare so automating the process matters. Your process will go more or less like this:

In short, this is an ongoing process that you can and should automate but also monitor.

As more and more marketers embrace content marketing and produce a growing volume of content while our attention spans stay limited, we run the risk of facing content shock. To overcome it and generate ROI from content, marketers need to be smarter with their content distribution strategy. Amplifying content organically is a cost and time effective strategy that can yield significant results provided you follow best practices and automate the process with software that keeps you in control.